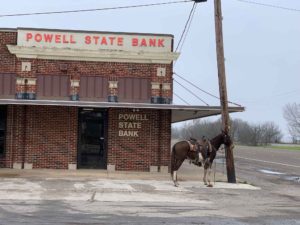 Powell State Bank had its beginnings in the year 1910 when steps were first taken to obtain regulatory approval for such an enterprise. J. O. “Odie” Burke was the prime mover of these efforts.
Having complied with the statutes of the day, the bank was opened for business November 30, 1910. At this time the officers of the bank were: J. S. Eubank, President; J. H. Burke, Cashier. The charter members of the board of directors were: J. S. Eubank, J. A. Thompson, C. S. Bradley, W. W. Carter, J. H. Burke, H. R. Harrison and J. P. Morris.

Oral history has it that the first bank building was a wooden structure on the same East side of Carr Street as the bank’s present location, except that it was North of the present site, in the approximate location occupied by Chatfield Water Supply Corporation in 1999. The second building occupied by the bank was a red brick structure on the West side of Carr Street, three lots North of being directly across from the bank’s present domicile. In the mid-1920’s this building became the headquarters of Stucker’s Hardware and was so used until sometime early in the 1950’s. Sylvian Stucker utilized the built in vault for business records, and during World War Il it was the secure storage for items that were rationed, and thus commanded inflated prices on the black market. Such necessities as tires and sparkplugs were secured here for these reasons.

In 1923 the present structure was built. About one third of the floor space was actually banking house, there also being a general merchandise store known as the Powell Company, owned by J. O. Burke and his brother J. H. Burke. In addition, there was a dry goods store in the building, next door to the bank and also fronting on Carr Street. During this time two small rooms on the South side of the building, fronting Hwy. 31 was rented for use as the post office. During much of this time the post office furnished P. O. Box 36 to the bank, free, and the bank provided the use of this space to the community for the same charge, free! Late in the 1960’s postal regulations required that a meaningful cash rental be paid (neither party on the local level had a choice) and the bank began to receive the princely sum of $25.00 per month, and paid rental on its box.

In 2010, Powell State Bank celebrated its 100th anniversary. Here is a link to the Corsicana Daily Sun article surrounding this momentous occasion.